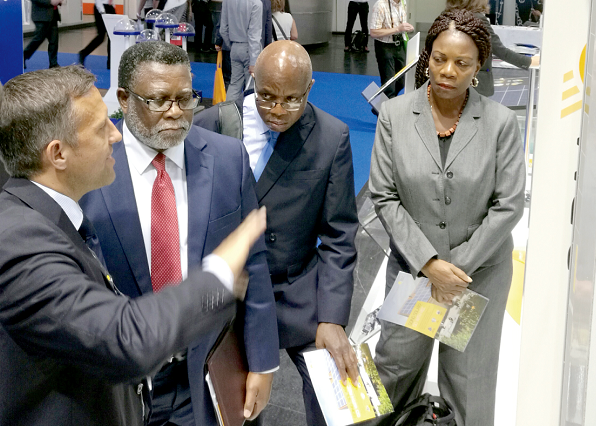 He said besides being mandatory, doing that would also give the commission the opportunity to test and certify their solutions and products against standards and specifications, adding that the commission´s approval would inure to the benefit of the companies.

Dr Ampofo gave the advise in Munich, Germany, where he was leading a five-member delegation of the commission to the International solar exhibition, interSolar 2016.

The Delegation of German Industry and Commerce in Ghana (AHK Ghana) facilitated the commission's participation in the annual solar exhibition as part of Ghana’s efforts to promote renewable energy deployment in the country. The commission also had the opportunity to visit some renewable energy projects, including mini-grids in solar and biomass as well as rooftop solar installations in selected cities in Germany.

The delegation included Dr Rudith King, Mr Innocent Akwayena, both board members, Ms Cecilia Agbenyega, Board Secretary and Head of Legal at the commission, and Mr Ken Appiah, a technical employee at the renewables department of the commission.

At a meeting at Munich Messe, the exhibition centre, with officials of REC Energy Systems, a German company which produces solar panels and other solar solutions including installations, Dr Ampofo urged the company, which was about to open its regional office in Accra in a few weeks, to work closely with the commission for the necessary supporting policy and information to help it to succeed in Ghana.

The Energy Commission chairman said for instance the commission had held meetings with several banks in Ghana on the need to design financial solutions for customers interested in deploying renewable energy systems such as solar power, and, therefore, new companies which approached and worked closely with the commission did not have to reinvent the wheel, contacting banks again.

The government has announced a rooftop solar project to provide 20,000 solar panels to homes by the close of the year.

Considering that the year is already half way through, speed is of essence and the commission does not want companies that can play in that sub-sector to start market research and other searches on its own but use the commission and the work it has already done on behalf of investors as a plug and play system for quicker deployment of their operations.

Dr Ampofo enumerated a number of measures the commission had put in place to encourage private sector participation and a boom in the solar energy space.

However, he said, the company was developing a kit solution to make solar panels adaptable to roofs in Ghana following a colonial design pattern that was not suitable for solar panels.

“After our assessment, we realised that people were going for the colonial type which for solar is not ideal in terms of the roof shapes. So we're developing kit solutions for the residential market in Ghana," Mr Casaer said.

He said the system would be plug and play so that it could be easily installed without the need for technicians.From the start, the company will make available 2.1kWh solutions for residential customers

He said besides being mandato...